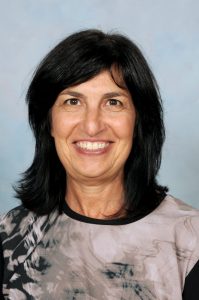 We introduced the story of Purim to the children this week. We are exploring this Jewish festival through many different languages: music and song, drama, drawing, collage, painting, emotions, language, puppets and more. We use a range of three-dimensional props and puppets to bring the story to life and set the scene:

“In the land of Persia, in a little town called Shushan… there was a king named Achashverosh, who lived in a palace with a queen named Vashti…”

We embraced the characters and their different personalities and values. For example, we discussed the bravery and honesty of Queen Esther, the loyalty and faith of Mordechai, the determination of Queen Vashti and the way she stood up for herself.

On Purim, we celebrate the bravery of Queen Esther, a very smart Jewish woman who was married to King Achashverosh. When Esther learned that Haman, who worked for the king, was plotting against the Jews, she summoned the courage to tell the king about Haman’s malicious plan and saved her people.

We have kept the facts of the story very simple, focusing on the characters such as the bad, mean man – Haman, who wanted to chase all the Jewish people away from Shushan. In the end, he is asked to leave the city and the heroine of the story, the lovely and kind Queen Esther saves the Jewish people. Through the telling of the story the children are exposed to some new concepts: the fact that they are Jewish, that they are part of a community, that there is a cyclical nature to Judaism as Purim is celebrated each year, and lots of different feelings and emotions, that come into this colourful story. 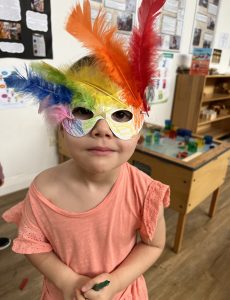 While discussing the different Purim characters, we linked their behaviours, feelings and attitudes to the Zones of Regulation and Alert program.

The festival of Purim is such a bright, happy and fun one, full of different sensory experiences. The shaking of the rashanim, the creation of brightly coloured masks, the dressing up in colourful clothes, as well as the sweet and tasty Hamantaschen.

The classrooms have been a hive of activity as the children immerse themselves in the creative activities on offer. There is a festive atmosphere in the rooms as the children delight in trying on different silly wigs and masks as well as making good use of the shakers to create some noise… all in preparation for our Purim parade on Thursday 17 March 2022.

After the story was told, the children were invited to the table to engage in a creative mask making experience. Different materials were provided for the children to decorate a mask – glitter, colourful crayons, sequins, pom poms, feathers and more. We look forward to seeing how these masks allow the children to take on the persona of different characters. We have also been making rashanim (shakers). We will be using the rashanim to drown Haman’s name when we have our Purim parade.

Each classroom has a table set up with lots of colourful costumes, wigs, hats, masks and rashanim. We provoked their thinking, by looking closely at all the items and doing a “see, think and wonder” routine.

Noam: It’s a racha-a thing that makes noise on Purim. I already bought my dinosaur costume.
Raphi: I see dressing up things. I have a doctor costume. 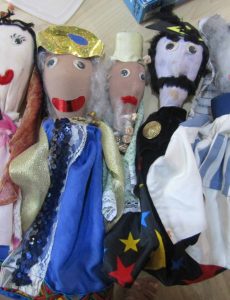 Luc: I have a pirate costume.
Gia: I’ve got a Cat in the Hat.
Ethan: I have Thomas the Tank Engine.
James: I like the hats.
Noa: Masks are fun.
Dylan: So many birthday things.
Zach: Things to play with.
Cleo: We eat hamantaschen.
James: We dress up.
Matteo: We get food, and we pass it to people. (Mishloach Manot)
Ana: We shake our shakers.
Dean: It’s all about Haman.
Mia: I like having hamantaschen.
Freddie: We need shakers, so we celebrate Purim.
Michael: I know we dress up and we wear fancy clothes.
Juliette: I like Queen Esther because she’s a queen and queens are so pretty.
Adrienne: I like princesses and mermaids to dress up as.
Claudia: Esther was too scared to tell the king she was Jewish.