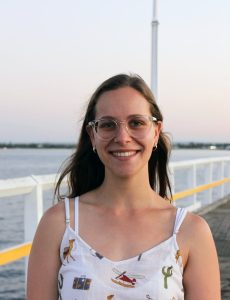 Hannah Beder (Class of 2012) is a technology lead, educator, and NSW Young Woman of the Year 2020. In her current role as Learning Designer and Research Lead at Creatable she develops education products and technology curriculums which promote entrepreneurship, encourage creative expression through technology, and prepare young people for the future of work. She also teaches coding to women and non-binary folk with Code Like a Girl, and is an industry expert and facilitator for OpenLearning’s CS101 courses. Hannah is passionate about addressing the historical gender disparity in technology through combatting the notion that ‘you can’t be what you can’t see’.

Hannah spoke to our High School students this week:

Imagine a room with two times this many people in it, and they’re all men, and they all study Computer Science. If any of you have attended STEM days with other schools, you may not need to imagine.

When I walked into my first university lecture, there were so many people, the room was buzzing, it was our first class! Looking around I saw people getting out their laptops, shuffling books, and chatting. Then I noticed there were almost no other women. It felt weird, but I didn’t know why.

I walked into the office on the first day of my internship at Google. I was beyond excited, I couldn’t believe they’d hired me! I noticed that almost half of the room were women. Then I remembered the reactions I’d had from some peers… “It’s just a diversity program, if you’d applied for the real thing you wouldn’t have got in”, “The company has to hire women so they don’t look bad”. It felt weird, but I didn’t know why.

I walked into the first Computer Science lab I ever taught. I put my things down and got comfortable, noting a few students sitting in the lab already. One looked at me and said “Where’s the teacher at?” It felt weird, but I didn’t know why.

Why are there so few female computer science students? Why do big tech companies have diversity programs? Why don’t girls study STEM subjects in school?

Ms Lord invited me here, by the way… I graduated from Emanuel in 2012, and when I was in High School, tech was a boys’ club for uncool people who code for fun like nerds. I was born in the mid-nineties, during the dot com boom when the internet became widely available. I was sitting in your seat, and saw tech as something totally separate from anything in my world. The nineties through to 2010 was peak season for computer nerd stereotypes across film and TV. I probably felt this way about tech because through a pop culture lens, tech looked like this, this, this, and this. So that’s how I felt about tech. Not cool, too hard, not relevant. Not for me. I didn’t have any answers to these questions about women and technology either, I wasn’t even close to uncovering them. I was busy playing netball and swimming, practising oboe and singing, and watching my fair share of TV. With this kind of inculturation, it’s no wonder I felt disconnected from tech, but now I wonder… has it always been this way?

Women and people from diverse backgrounds are underrepresented in technology. When I scratched the surface to find out why, I learned that women were involved with computing in its earliest days. So I investigated what happened between then and now, to understand how we got here. I learned that for 200 years, computers and calculators were people, not devices. These computers and calculators were women who did scientific calculations by hand, and their computational work underpinned the scientific age. I learned that when human computers were replaced by electronic computers, the women who previously did the calculations by hand retrained to operate the computing machines. I learned that at the time most male engineers and scientists didn’t trust the machines, feeling that they were unreliable. Computer programming was dismissed as ‘women’s work’. I learned that only during the 1990s, following the creation of the personal computer, that a cultural shift occurred in who computers were really ‘for’. Computing was no longer administrative, clerical women’s work. The personal computer framed computing as a hobbyist pursuit, and those hobbies were for men. But that is not the case anymore, nor has it always been the case.

What I’ve learned since then is that STEM is the ‘how’ in between creativity and problem solving. STEM is the knowledge and understanding which enables you to imagine, envision, and create the future. Drawing on the past, reimagining this future, is what propels me forward. And you’ve been listening to me for long enough, I should probably introduce myself. I’m Hannah, the Learning Designer & Research Lead at Creatable. I studied Computer Science at UNSW, and have held many different positions since. In my current role I research and play with new technologies, finding ways to make students like you think they’re cool. I make engineering resources for schools in Burundi. I adapt toys for children with disabilities. I make websites, I manage developers, and I teach coding.

I hope hearing from me today has shown you that STEM careers are expansive and varied, and that women have always been a part of this world. I am in it now, and you can be too. Thank you.