Hotline – A Review by Ricky Blank

I recently had the privilege to watch the screening of Hotline in the Millie Phillips Theatre along with approximately 70 members from our School community. The film showcased the work that volunteers and employees undertake in the small non-government organisation, The Hotline for Refugees and Migrants (HRM), a leading organisation working on behalf of migrants and refugees, combatting human trafficking in Israel.

“The Hotline for Refugees and Migrants (HRM) was founded in 1998 as a non-partisan, not-for-profit organisation to defend the rights of migrants and refugees in Israel and to combat human trafficking. The HRM assists vulnerable individuals, particularly those held in immigration detention, to uphold their rights. By combining client advocacy with impact litigation, policy initiatives and public outreach, we aim to achieve broad-based, systematic improvements in policies and practices ensuring that the human rights of migrants in Israel are respected.” *

HRM was approached by Silvina Landesman, who directed and wrote Hotline, to film the work of the small NGO, although the organisation wasn’t able to control the content of the movie. Filming commenced in 2012 and the film was released in 2015.

As Hotline shows, HRM continues to fight, even when their perspective may not be popular, for the rights of those who may not have a voice.

Since the establishment of the organisation, several significant achievements have come about. One example is that as of 2013, all asylum seeker children are no longer confined in detention. In a case on behalf of an Eritrean woman who had been held in detention with two children for more than 10 months, a judge declared that for humanitarian reasons, children should not be held in detention.

As Jewish people, it wasn’t long ago that we were asking the world to open its borders and let us in. The State of Israel is seen as a safe country for people around the world, including those from Eritrea and Sudan. The final word from the Q & A session hosted by Tamara Newman, Emanuel alumna and the Director of Resource Development at Hotline, encouraged us all to discuss this in our Jewish communities. I too encourage us all to educate ourselves about Israel’s policies and positons regarding migrants and refugees. If we consider the past of the Jewish people, would we want others to be treated the way we were as refugees and migrants seeking help from the world community?

I am writing to personally thank you for attending the screening of Hotline at Emanuel School on Wednesday night.

Thank you for your openness to deal with such a challenging topic, and for sharing in an interesting conversation. I hope you enjoyed it.

I also want to thank Emanuel School for hosting me. It was incredibly meaningful for me to come and speak about the work I am doing in the School where I was educated.

I wish I had also taken the opportunity to mention that so many of the people you saw speaking to clients in the movie – all the girls in the office – are volunteers. We have many volunteers who, together with our small but incredibly hard-working and talented staff, ensure that we are able to assist so many vulnerable individuals on a very small budget. As I mentioned, we are able to operate due to the support of organisations like the UNHCR, but it is also due to the support of many individuals who believe in what we are doing and who enable our work by donating. If you were moved by what you saw I hope that you too will want to be a part of our community of supporters. Donations of all size, no matter how big or small, enable us to do the work of protecting the rights of some of the most vulnerable people in Israel.

Please be in touch with any further questions or suggestions, Thank you again for coming to the film. 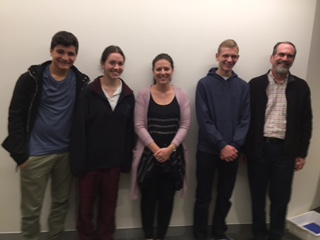 Students with Tamara Newman, Director of Resource Development for Israel-based The Hotline for Refugees and Migrants, following their viewing of the film Hot Topic. From left to right: Gabriel Sebban, Sara Bortz, Tamara Newman, Edan Amsalem and Rabbi Daniel Siegel.