The Year 8 French Day was really fun and super exciting. All three French classes were mixed together and then split up into groups. We were each named after a French town or city. During the day our project was to create a promotional film about Emanuel. We all directed our own movie about Emanuel. We also got to walk around the School with friends. We brought our own French food to make a delicious vegetarian French picnic with our groups. There was a competition for the best French Picnic, and the best movie. 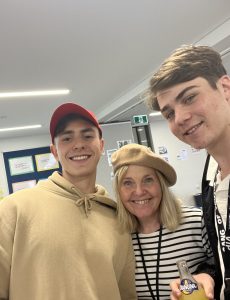 The Year 9, Year 11 and Year 12 French class students were available to help us with anything we might need during the day including help with scriptwriting, acting, narrating in French and filming. We had free rein over the campus, so we had access to all the beautiful sights of the School to make our movie as cool as possible. There was also a certain amount of time that we had to film and edit the whole movie, it was about two hours from periods 3-6. Creating the film was a great challenge to do in that time. For some of us the favourite part was trying the French Orangina, for others the best part was the shared picnic lunch as it was really creative, and we could make and bring whatever we wanted and share it with others. It was also a highlight getting to see all the other group’s films at the end of the day.

Overall, the day was a great experience and really fun, we all learned a lot and I’m glad we all participated. Merci!